After a week of voting, it was finally time to reveal which was the winning phone in our camera comparison involving Samsung Galaxy S21 Plus, Lenovo Legion Phone Duel, Asus ROG Phone 3 and Xiaomi Mi 11. Could it be that gamer phones are evolving in camera or still lose to more conventional models?

It is good to remember that our comparison was attended by the public and also by the TudoCelular team. The votes went blindly, that is, no one knew which smartphone had captured each photo, thus guaranteeing maximum impartiality.

The photos were captured with smartphones using automatic mode, except for the HDR scene (where HDR was activated manually if it did not happen in automatic) and night mode. All at the maximum resolution allowed in the 4: 3 ratio, which is usually where we reach the full potential of the sensor. The vote can be checked by clicking here.

Now find out the order of the smartphones used in the test:

The results listed below are the result of the following methodology with the creation of the individual and final ranking. Each smartphone received a score in each individual comparison, where the sum of all points revealed the winner. The following weights were used:

After explaining the scoring method, we proceed to the results!

We started our comparison with a type of photo that most people love: selfie with portrait mode. Here we already see a clear difference between the competitors. First comes the Galaxy S21 Plus with the most balanced selfie in sharpness, colors and background blur. The Mi 11 also did well in this scenario and came in second. This is where Asus shows that it still needs to evolve, and the ROG Phone 3 recorded the worst selfie of the four.

Still speaking in portrait mode, who is going to get the better of blurring the background with the rear camera? This is where Xiaomi pays back on Samsung and the Mi 11 registers the best image. The Mi 11 photo showed the best balance between details, colors and few blurring errors, leaving the S21 Plus in second place. The Legion had the most artificial effect, but it still managed to be better than the ROG photo with almost no portrait effect. 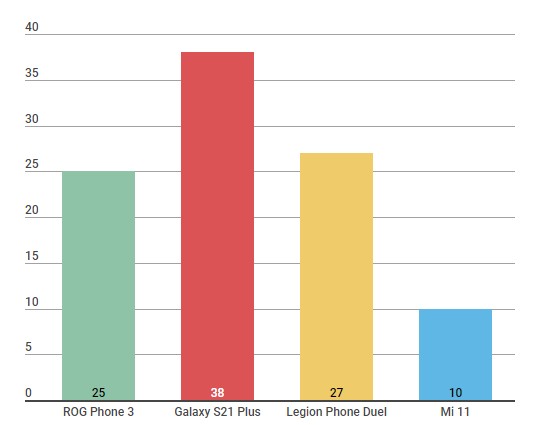 Will gamer phones always be last? To our surprise, the Legion and the ROG defeated the Mi 11 in HDR shots against the sun. Xiaomi’s model suffered the most to compensate for the light and save our model from being overshadowed by excess light in the background. The Galaxy S21 Plus was the best in this comparison and delivered a more balanced image than the Legion that came in second. 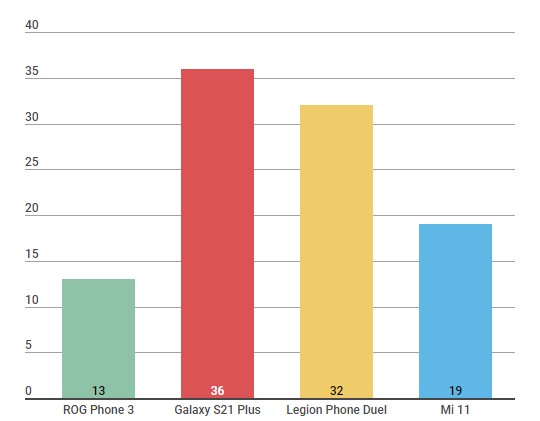 And if we use the zoom to get closer to our model, will the result change? Samsung’s cell phone is still at the forefront, showing that when using zoom the good balance seen previously has not been sacrificed. However, here we see the Mi 11 pass the ROG, showing that the Asus does not handle digital zoom well. Legion maintains its runner-up with the second best photo. 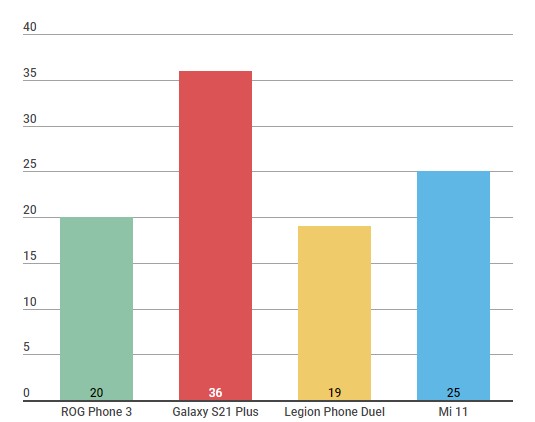 Who doesn’t love to photograph beautiful landscapes? Some cell phones are able to capture larger images, but they do not always record all the details or capture the colors as they really are. This is another point that Samsung sends well and the S21 Plus records the best photo. The Mi 11 lost some of the details in the shadows, but it is right behind the Korean model. ROG and Legion are left behind, with the Lenovo model coming in last for the first time. 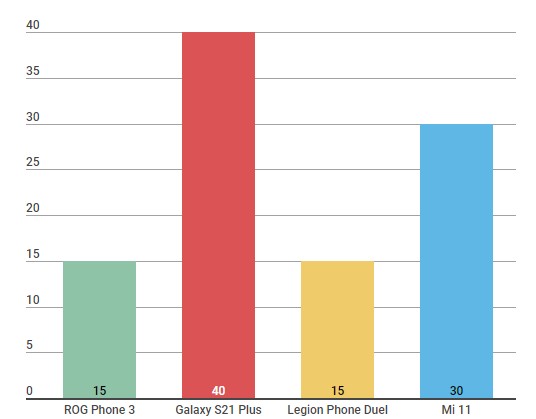 Still in the same scenario we decided to zoom 10x to try to capture a photo of our model that was far away. This is where the Galaxy telephoto camera makes a difference and we have the sharpest image of the four. The Mi 11 does not have a dedicated camera for zooming, but its 108 MP sensor can enlarge the photo to the point of still delivering a decent result. The ROG and Legion are tied with really bad photos. 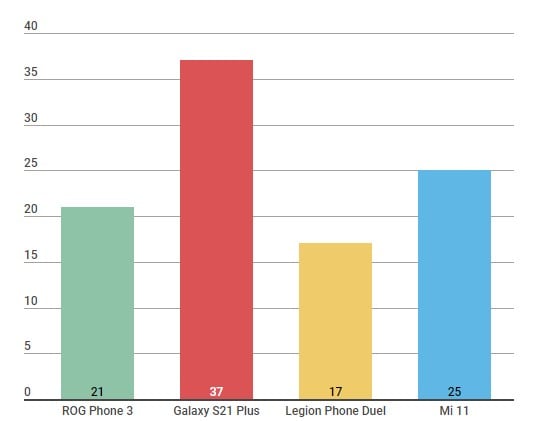 Not every cell phone can strike a good balance between light and dark areas, having a good contrast ensures that the colors come out as they should be, without over-saturation or completely erased. Samsung sinned this in previous generations, but it learned its lesson. The S21 Plus is the most balanced, leaving the Mi 11 in second. The ROG exaggerated the exposure, while the Legion abused saturation. 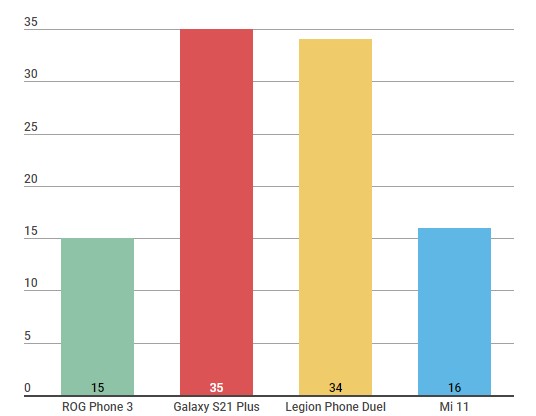 And what is the best cell phone for macros? Of the four devices in our comparison, only two have a camera dedicated to macros and it was precisely the two that came in last. Irony? S21 Plus and Legion were almost tied with the sharpest photo, but we ended up giving victory to Samsung’s for not overdoing the saturation. Okay, that can be fixed in editing, but it will be less work than you will have.

Photo 9 – Under the shade 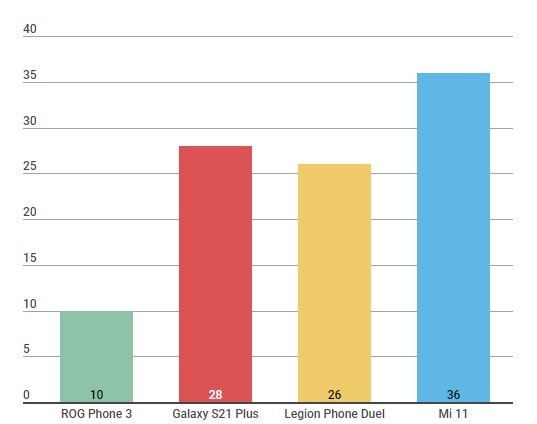 The S21 Plus won in contrast by darkening well the points of the photos that need to be dark, but it is in photos taken in the shade that we see this as something bad. It ended up killing some details that were captured by the Mi 11, which makes the Xiaomi model take another victory in this comparison. Still, the Galaxy was ahead of the Legion, while the ROG once again bitter the last position. 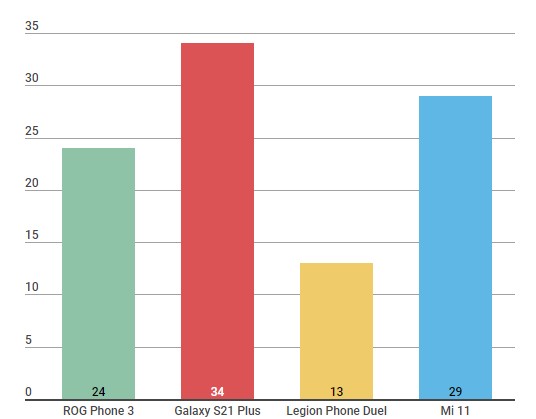 We decided to try another comparison focused on contrast just to make sure that Samsung is really the best. This time we photographed something closer, to see how each camera deals with the adjustments of what is in the background, and there was no way the S21 Plus got the better of it. The Mi 11 comes in second with a photo almost as good as that of the Korean rival, leaving the ROG in third and the Legion in last. 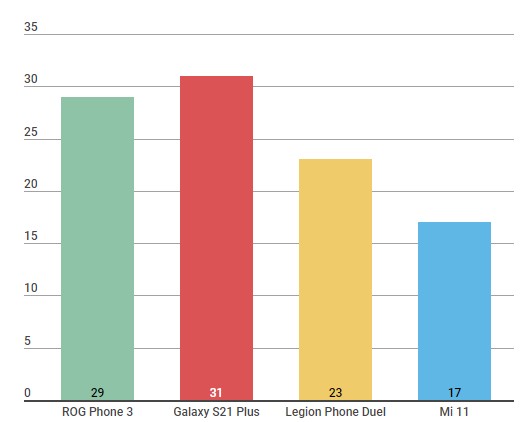 Let’s leave the clear photos aside and move on to more precarious situations. Which is better to shoot at dusk? The Galaxy S21 Plus does not only do well in brightly lit environments, but is also the best for taking photos in darker places. We expected to see the Mi 11 come in second as Xiaomi hit others in this type of scenario, but it was the ROG that took the silver medal, while the Legion came in third. 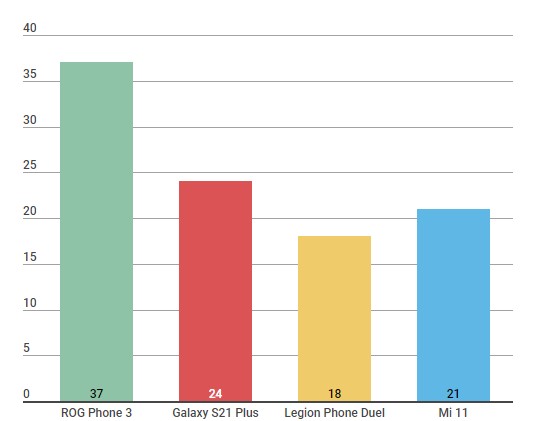 The Galaxy S21 Plus has been winning practically all comparisons, but in night scenes with backlight we see that the Korean top ended up losing sharpness, which allowed ROG to register the best photo and take its first victory. Once again we expected to see the Mi 11 win, but it seems that Xiaomi has not properly regulated its software to take advantage of the advanced sensor it has. Legion came in last with the worst photo. 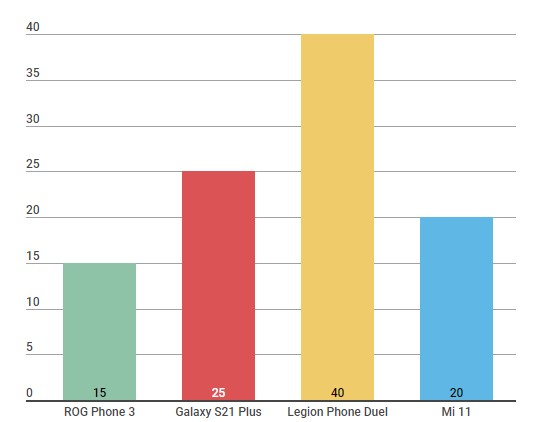 Samsung took the best in selfie with portrait effect in the day comparison, but does it also take the victory with night photo? The S21 Plus even tried, but ended up yielding the first place to the Legion. Who knew that a gamer phone that has no camera focus would win one of the biggest launches of 2021? Third is the Mi 11 followed by the ROG with the worst selfie. 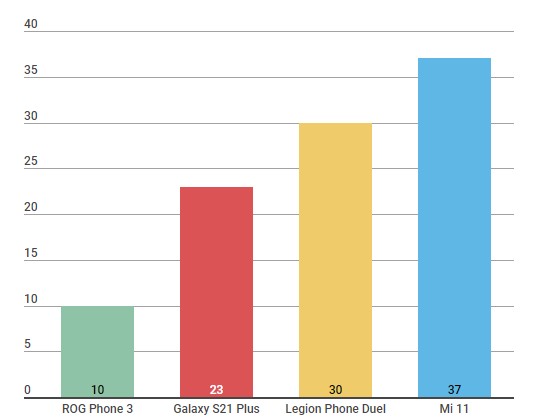 And portrait photo with the rear camera? The S21 Plus software ends up darkening the images in these cases, a problem that must be corrected in the future. With that, the Mi 11 comes out ahead and recorded the best photo, despite presenting a marked level of noise. Legion was even better at it, but tried so hard to clean up the noise in the photo that it killed all the details, but still takes the silver medal, since the ROG was by far the worst of the four. 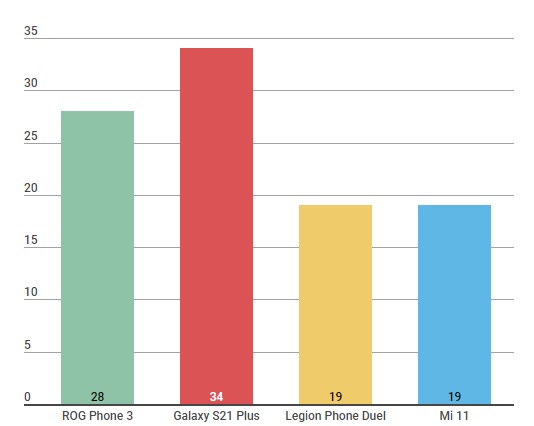 Finally, photo at night with night mode activated. The Galaxy S21 Plus and ROG did the best job, with Samsung’s preserving more distant details. Xiaomi has already impressed us previously with the Mi 10 Ultra, but the Mi 11 does just a decent job, which ended up taking it to the last position together with the Legion.

Result of the photos 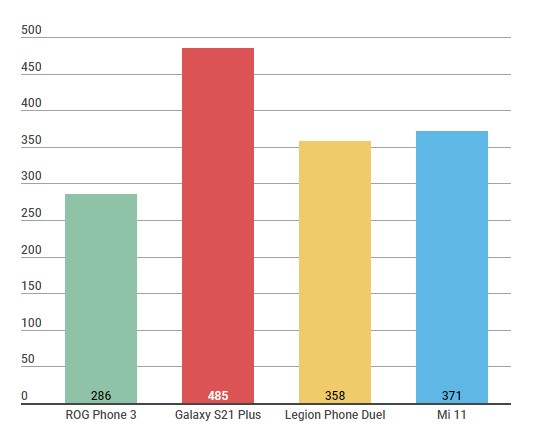 After 15 photo comparisons, who won? Are you still in doubt? The Galaxy S21 Plus was far above rivals and registered the best shot in 10 scenarios, while the Mi 11 was in second place with three victories. Yeah … there’s no denying that gamer phones still disappoint on camera, but it’s interesting to see that the Legion fared better than the ROG in many cases.

Order of the most voted

And in the videos? Does the story change? Legion is the only one in this comparison that does not record videos in 8K. The S21 Plus even shoots at this resolution, but only at 24 fps, while the Mi 11 and ROG Phone 3 reach up to 30 fps for greater fluidity.

The Galaxy S21 Plus took the best in photos and also wins the victory in videos. It records with high quality, has a good stabilization system, agile focus and captures audio cleaner than the others. The Korean top even suffers from noise when filming at night, but the other three also sin in that – especially the Legion, which has the worst night videos.

The Mi 11 is capable of capturing good videos, has an efficient stabilization system, but the autofocus is problematic and you will have to touch the phone’s screen so that it knows where to focus. The night recordings are decent, the front is a little worse than the Galaxy, as well as the audio capture.

The ROG Phone 3 may have picked up on photos, but it beats Legion in videos with good slack. With Asus you will have clearer footage, with less blur and more agile focus. The problem with the ROG is that the videos come out dark at night, it being necessary to be close to a light source, but it even ends up suffering less with noise than the others. Lenovo’s already loses to the rest of the comparative in practically everything.

If you want a gamer phone with a good camera, then the situation is complicated. Neither the ROG Phone 3 nor the Legion Phone Duel can impress … and often even disappoint. They are expensive phones that have cameras inferior to much conventional cell phone that costs half.

Unfortunately, there is nowhere to run. Those who enjoy photos will have to invest in a more conventional phone, such as the Galaxy S21 Plus, which delivers the most complete experience. It is great for taking photos and recording videos.

But if you make a point of having a gamer phone, the ROG Phone 3 would be the best bet. He even lost to Legion in some photos, but he has a better camcorder and in the end delivers the most balanced experience.