The tragedy of the pandemic in Brazil has reached numbers so alarming that it is increasingly difficult to measure the deaths that happen in the country and still compare them to the rest of the world. In addition, groups that deny the seriousness of the pandemic make use of comparisons at times with proportional data, at times with absolute data.

Anyway, it is possible to affirm today that Brazil concentrates one third of the daily deaths by covid in the world, even with 3% of the world population. In addition, more people died in March in Brazil than in the entire pandemic in 109 countries, which adds up to 1.6 billion inhabitants.

In addition, official data from Brazilian hospitals indicate that the number of deaths from covid-19 may have already surpassed 443 thousand, almost 120 thousand more than the statistics released by the Bolsonaro government. The same estimate indicates that about 4,000 people die every day in the country.

BBC News Brasil presents three charts below to help understand the situation in Brazil and how it compares to other countries. Daily deaths, deaths throughout the entire pandemic, speed of vaccination and when Brazil is expected to reach 500,000 deaths by covid.

1. Today, Brazil has 3% of the world population and 33% of deaths per day no world

The world population is almost 7.8 billion people. As of March 31, 2021, 11,769 deaths from covid were recorded in all countries of the world together.

2. Covid killed more in March in Brazil than in the entire pandemic in 109 countries combined

One of the main arguments of people who minimize the severity of the pandemic in Brazil is the size of the population. They say that it is not fair to compare Brazil with countries with fewer inhabitants.

In other words, according to this perspective, Brazil, third in the total number of deaths, would certainly be among the nations with the most deaths because it is the sixth most populous in the world.

And if the size of the population goes into the account, Brazil will be the 17th in worst situation, behind countries like the United States, Italy, Portugal, United Kingdom, Spain and Mexico.

But experts point out that this type of comparison hides the country’s current situation, and mixes data from countries at different stages of the pandemic.

Then, below are two comparisons taking into account the size of the population and the current situation in the country. 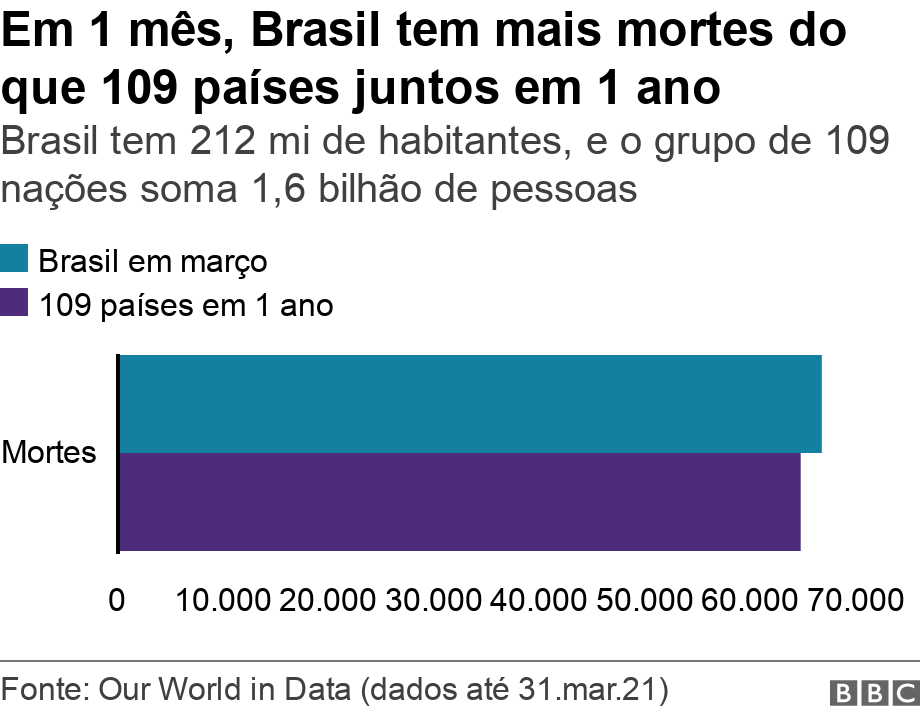 This group of countries includes 36 countries with a Human Development Index (HDI) higher than that of Brazil and 26 with more than 20 million inhabitants. These include South Korea, Australia, Malaysia, Nigeria, Ghana, Angola and Vietnam.

B. When comparing the current death rate for every 1 million inhabitants, Brazil has the sixth worst situation in the world, after Hungary, Bosnia and Herzegovina, Seychelles, Czech Republic and Bulgaria. They all have less than 11 million inhabitants.

3. Brazil ranks 18 in the vaccination ranking

There are several ways to compare the rate of vaccination between countries. In total numbers, Brazil would be in the fifth position, with 18 million doses distributed. But, as mentioned above, even those who minimize the gravity of the situation argue that the comparisons take into account the size of the population.

In this case, Brazil plummets to the 18th global position, with 9 doses for every 100 inhabitants. Leader Israel, with 116 for every 100 people.

These numbers do not consider who received one or two doses (which would guarantee the vaccine’s full effectiveness). So far, Brazil has vaccinated 7% of its population with at least one dose. The UK vaccinated 45%, Chile 35% and the USA 29%. 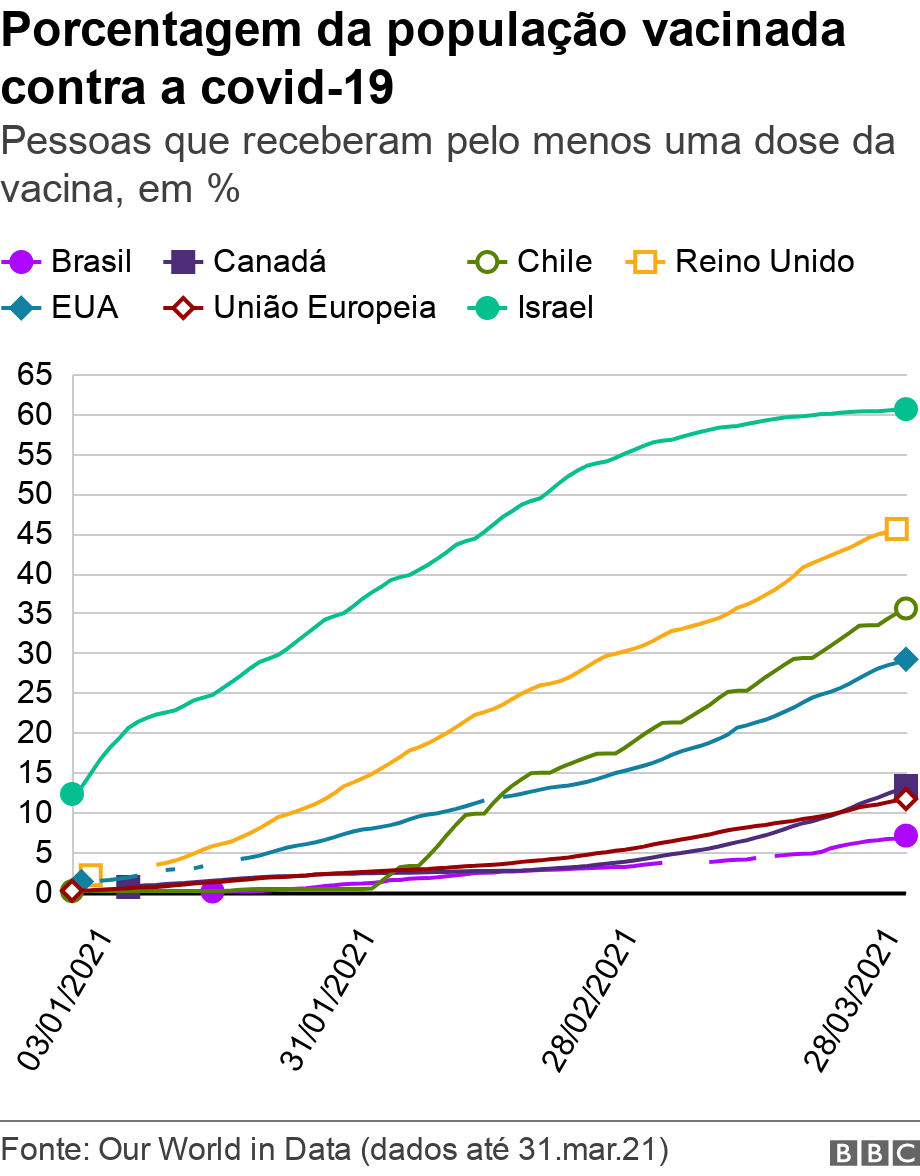 In comparison with the current rate of vaccination, Brazil ranks 13th. Two people are vaccinated for every 1,000 inhabitants per day. In Uruguay, there are 10 out of 1,000.

The lack of accurate data on the situation of the pandemic, something that Brazil has faced since March 2020, makes it very difficult to analyze what happens today and what may happen in a month, for example.

But there are mathematical models that try, with all the limitations of lack of data and uncertainties, to present a closer picture of reality than the official data.

Officially, Brazil surpassed the month of March with the tragic mark of 321 thousand deaths by covid-19 during the pandemic. But Brazilian hospital records indicate that the number of people who died as a result of confirmed or suspected cases of the disease in the country may have already surpassed 443 thousand.

This number was released on April 1 by Leonardo Bastos, a statistician and researcher in public health of the Scientific Computing Program of the Oswaldo Cruz Foundation (Fiocruz). He leads nowcasting analyzes in a partnership involving Mave, a team from Fiocruz of Analytical Methods in Epidemiological Surveillance, and Observatório Covid-19 BR, a group that brings together scientists from different institutions (such as Fiocruz, USP, UFMA, UFSC, MIT and Harvard).

Estimates indicate that 4,000 people per day died in Brazil this week from suspected or confirmed cases of covid in hospitals in the country.

And the trend is that the situation will continue to worsen. Imperial College London points out that the country’s contagion rate currently stands at 1.12. The pandemic only recedes when that number falls below 1.

Projections from the National Laboratories of Los Alamos, in the United States, point out that the worst scenario is very likely to materialize and Brazil will go from 516 thousand deaths by covid until May 9th.

Underreporting, however, points out that this may already occur in April, if the situation does not improve.

PREV Vaccines against Covid-19 are stolen in Rio, says Health Secretariat
NEXT Monday will have smoke circulating in 23 neighborhoods of the Capital