The Directorate-General for Health (DGS) and the National Institute of Health Dr. Ricardo Jorge (INSA) issued this Saturday the first monitoring report of the “red lines” measures defined by the Government to combat covid-19.

According to the report, the transmissibility index (Rt) has been rising in Portugal since February 10, although it remains below one in almost all regions, with the exception of the Algarve, where it is at 1.19.

When it presented the deconfination plan, on March 11, the Government defined a maximum value of Rt for the national territory. Accompanying this parameter is the incidence, given that it reveals the cases per 100 thousand inhabitants in a given period of time, and which, according to the report, “has been decreasing in all regions”, with the Algarve also being exceptionally, which has 112 cases per 100 thousand inhabitants (the maximum limit set was 240).

Other essential measures for measuring the current situation of covid-19 in Portugal are related to the number of patients admitted to intensive care and to the positivity of tests performed in the country. 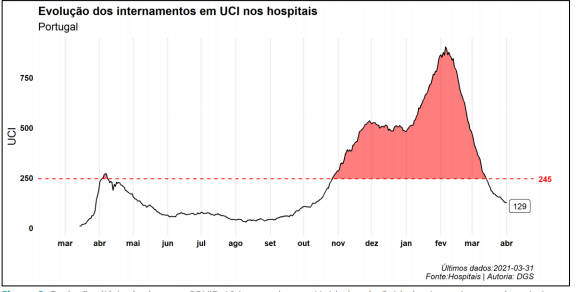 If, at the peak of the third wave, we had almost one thousand hospitalized in serious condition, this number today is below 200 (126). Here, the limit number defined by the Executive, together with the experts, was 245.

Finally, the positivity of tests in Portugal should not exceed 4%, a value that was also defined by the European Center for Disease Control and Prevention. Currently, this number is 2%, “a value that remains below the defined goal of 4%, and the total of tests carried out in the last 7 days was 152,695”, refer DGS and INSA.

As for the ability to track and isolate, inform DGS and INSA that all cases reported in the last seven days were isolated less than 24 hours after diagnosis. Of the risk contacts of these people, 91.5% were screened and isolated.

The global analysis of the various indicators suggests a controlled epidemiological situation, that is, community transmission of moderate intensity and reduced pressure on health services in the coming weeks. However, attention should be paid to the increase in transmissibility in one of the regions of the continent. The current Easter period and the beginning of the deflation are factors that can interfere in this situation, with reflexes that will take a few weeks to be visible “concludes the report.

This Monday Portugal enters a second phase of lack of definition, in which the 2nd and 3rd cycle schools, museums, terraces, day centers and gymnasiums will reopen.