The Brazilian federal government already accounts for more than 500 million doses of vaccines
against covid-19, enough to immunize the entire population and have a surplus of the most disputed asset in the world today.

But the current reality in Brazil is marked by a lack of vaccines, slowness in the application of available doses, delivery delays
predicted inside and outside the country and the consequences of the delay of the government of President Jair Bolsonaro (without a party) in buying immunizers.

The forecast released by the Ministry of Health has already changed five times in March, for example, always reducing the number of doses to be distributed in the coming weeks and postponing more and more deliveries.

The current schedule of the Ministry of Health foresees the delivery of 154 million doses in the first half of 2021, considering only vaccines approved by Anvisa: Coronavac, AstraZeneca-Oxford and Pfizer. That would be enough to immunize the entire priority group, but that does not mean that all of these 78 million people would be vaccinated before July – Brazil has managed to apply only half of the available doses and there is a three-week interval between the first and the second dose.

In addition, due to recurring delays and high international demand for vaccines, some experts view this schedule with skepticism.

“With your feet on the ground, until the middle of the year you will probably have a vaccination for those over 60 and can probably advance a little further in their 50s, including also other professionals at risk. That is what we are going to have until the middle of the year. We are talking about 40 or 50 million people. And 100 million doses of vaccines, “said Dimas Covas, director of the Butantan Institute, in an interview with the newspaper Valor Econômico on April 4, 2021.

Based on the most recent information, BBC News Brasil outlines three scenarios for the vaccination period foreseen for different groups of the Brazilian population – besides what can go wrong or even improve in the middle of the road, if vaccines like the Russian vaccine are approved Sputnik V
or the Indian Covaxin.

It is important to keep in mind that everything can change, as has been seen in recent weeks.

The trend, so far, is that the start of vaccination of non-priority adults should happen at least in the middle of the second half of 2021, while that of young people under 25 should happen only in 2022.

The situation of minors is even more uncertain.

A recent study by UFJF (Federal University of Juiz de Fora) pointed out that Brazil needs to vaccinate 2 million a day to control a pandemic in up to a year. Experts point out that the country would have the capacity to immunize more than 1 million people a day, as it did in the H1N1 pandemic in 2009.

The federal government has so far distributed 43 million doses to states and municipalities. Of the total, 21.1 million have already been applied, with 16.4 million as the first dose.

Until reaching the level needed to contain deaths and infections, there are four major obstacles to the 563 million doses planned for this year by the then Minister of Health, Eduardo Pazuello. Are they: 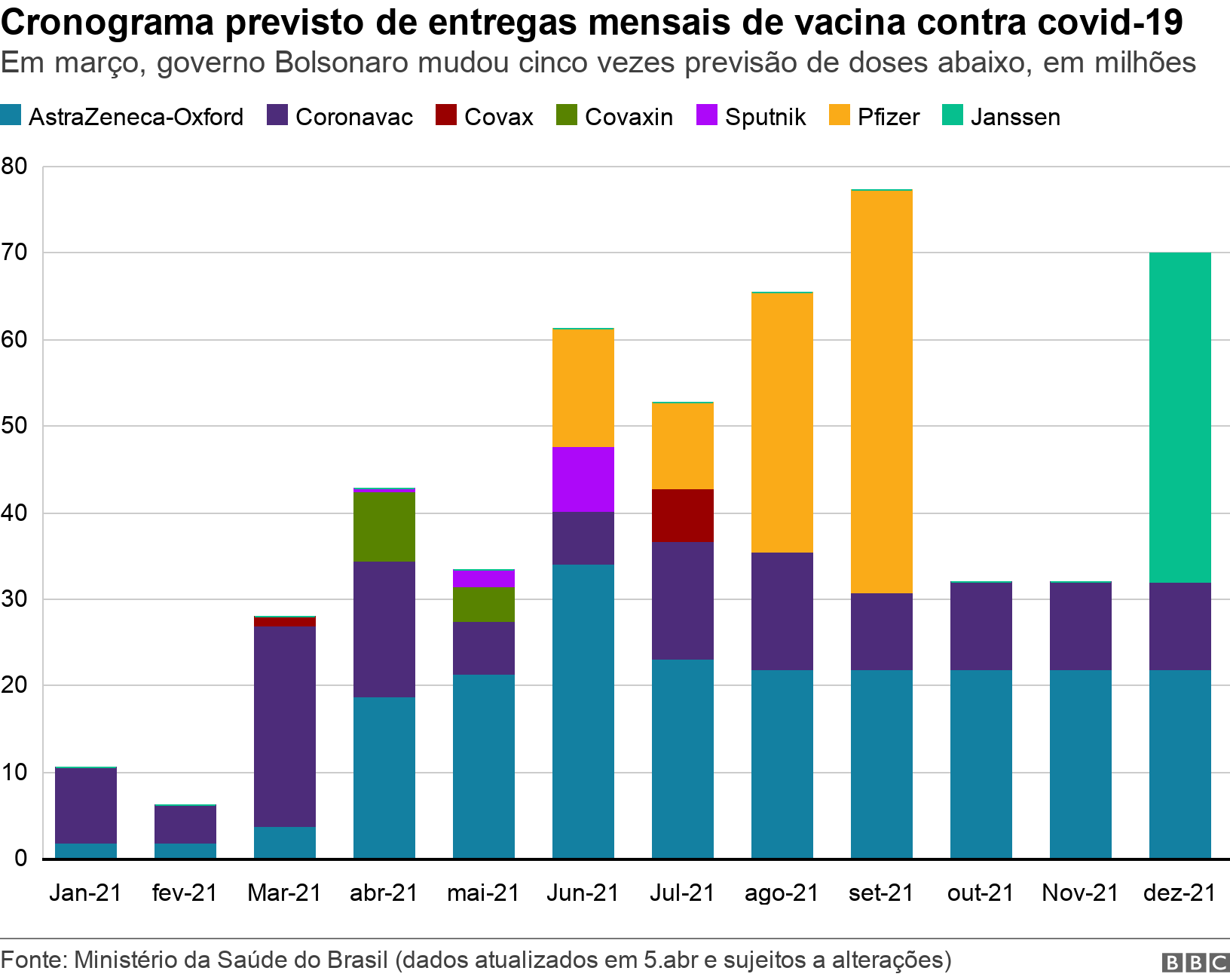 The Butantan Institute, for example, reported that it can only secure the schedule until April. After that date, “the delivery of doses is conditioned to the arrival of IFA (raw material for the imported vaccine) so that Butantan can perform the filling, labeling and packaging of the doses”.

Fiocruz presented a schedule very similar to that of the Ministry of Health for monthly delivery of AstraZeneca-Oxford, and is preparing to produce and deliver to the government 1 million doses per day.

The two Brazilian institutions, which add up to 350 million doses foreseen by the federal government, have faced successive delays in scheduled deliveries for several reasons, mainly the delay in sending doses and raw materials imported from China and India.

Both are preparing to fully produce the vaccines and guarantee national autonomy, but this should only happen between the second half of 2021 (Fiocruz) and the first half of 2022 (Butantan).

State governments have also started to act to increase the doses available in the country. An example involves 37 million doses of Sputnik V
contracted by the consortium of governors of the Northeast. These vaccines would be passed on to the federal government, which will be responsible for the payment and proportional distribution to all Brazilian municipalities, and not just the Northeast region. But these vaccines, which have not yet been approved, have not even been included in the Ministry of Health’s forecast.

União Química, a Brazilian pharmaceutical company that closed an agreement with the Russian government to manufacture and distribute the Sputnik V vaccine in Brazil and Latin America, started production of the vaccine in the country, in a pilot project, and says it may produce 8 million doses per month after Anvisa’s endorsement.

In addition, according to the company, the Gamaleya Institute, responsible for the Russian vaccine, sent a schedule to the Brazilian government about an eventual purchase of 10 million doses. The forecast points to the export of 400 thousand doses to Brazil one week after the signing of the purchase contract, 2 million one month after the agreement and another 7.6 million over the next two months.

The Brazilian immunization plan against covid-19 divided the adult population into priority and non-priority.

The priority group is subdivided into 29 categories, including the elderly, adults with comorbidities, health professionals, people on the street, prisoners, workers in the education sector, security agents, bus drivers and truck drivers. 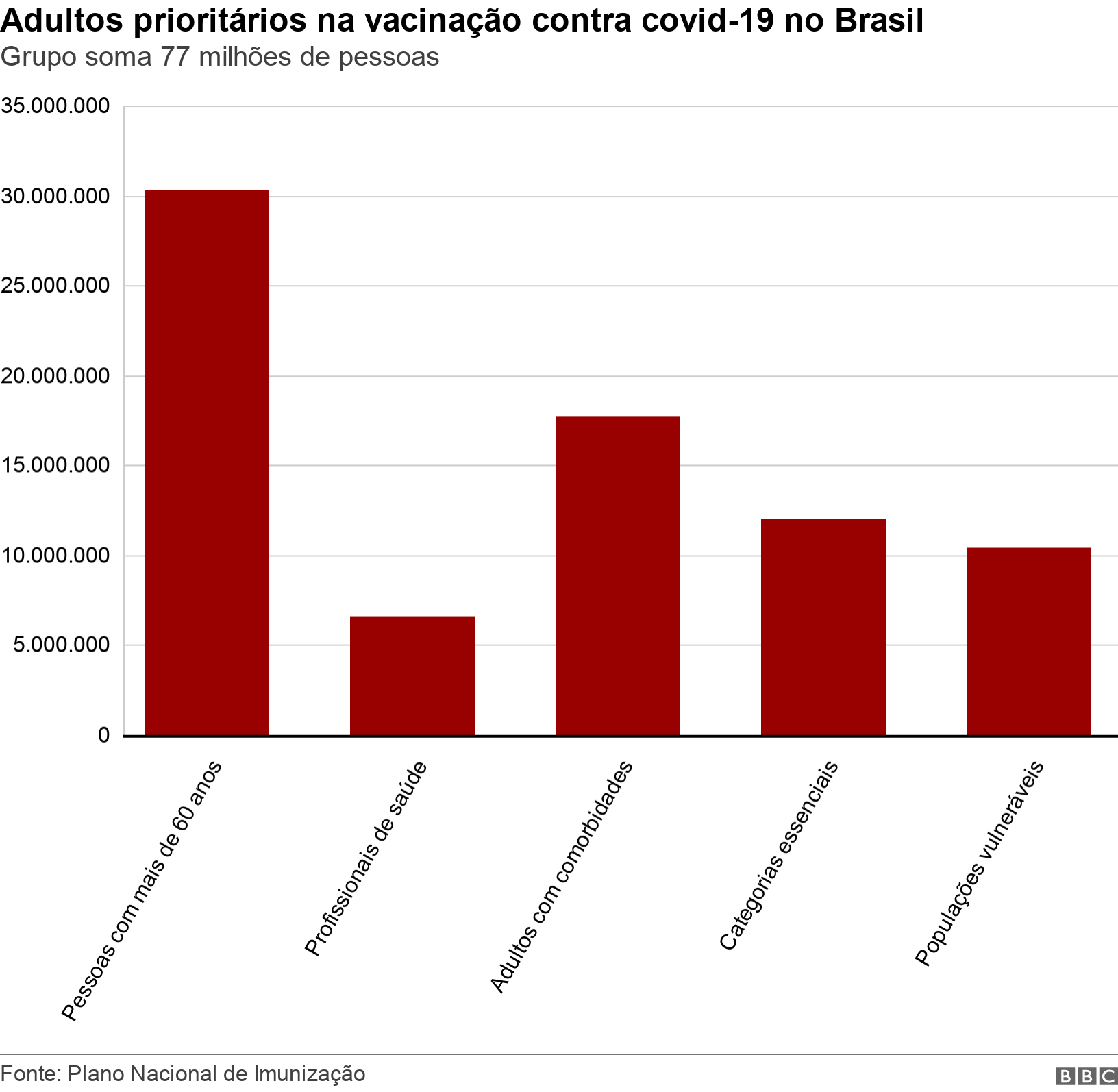 To vaccinate this entire group, therefore, 154 million doses would be needed. Considering the vaccines already approved by Anvisa, this amount would be available until June this year, if there are no delays in delivery, manufacture or distribution.

On the other hand, Brazil has maintained a vaccination rate that corresponds to half of the doses distributed. That is, it has applied so far 21 million of the 43 million sent to states and municipalities. For every 10 doses applied today, 8 are from Coronavac, criticized and boycotted for months by President Jair Bolsonaro, who even canceled the purchase of this immunizer.

The difference between the number of doses distributed and applied in Brazil is partly explained by the need to reserve a quantity as a second dose, and an eventual shortage could affect the immunity of the vaccinees. To try to speed up vaccination, the federal government recommended using these reserves as a first dose because suppliers guaranteed deliveries.

But this change in federal orientation has not yet had an effect on the rate of vaccination, and in the face of scarcity and delays, it is likely that many managers will maintain the policy of reserving doses for the second application weeks after the first. Efficacy against covid is only guaranteed weeks after the second dose is applied.

If this proportion of vaccines distributed / applied is maintained throughout the year, the immunization of priority groups may extend until September 2021 in Brazil.

Generally speaking, the order follows three stages. 1. the elderly and health professionals; 2. adults with comorbidities; 3. professionals from essential professional categories. The city of São Paulo took the whole month of March to vaccinate only elderly people aged 70 to 79 years.

The most numerous group among the priority groups are adults aged 18 to 59 years with comorbidities (or pre-existing diseases), including diabetes, Down syndrome, cystic fibrosis, hypertension, liver cirrhosis, heart disease and people with morbid obesity (BMI above 40).

That slice represents almost 18 million people and is at greater risk of dying from covid-19 or developing the severe form of the disease.

“The rate of vaccination in the country is insufficient to vaccinate the priority groups of the National Immunization Plan (PNI) in the first half of 2021, which expands the vaccination horizon for the entire population by mid-2022.

The consequences are unspeakable, “say bankers, businessmen and economists in an open letter criticizing the Bolsonaro government and proposals for the pandemic (read the full text here).

According to data from the Brazilian Institute of Geography and Statistics (IBGE), the number of inhabitants aged 18 to 59 years in the country totals 125 million people. About 40 million of them are in the priority group.

It is still unclear how vaccination would proceed for this group, but it must follow the same current patterns (adopted even in other countries, such as the United Kingdom). People would also be divided into age groups and immunized in decreasing order, with young people around 18 years of age last.

Nor is it possible to estimate the rate of vaccination in the second half, but the federal government says that the obstacles faced by the country currently correspond only to the beginning of the manufacturing and distribution process, concentrated in two manufacturers.

In the second half of 2021, with more options and doses available, in addition to the 100% national manufacture of AstraZeneca-Oxford by Fiocruz, the trend would be to easily surpass the mark of 1 million vaccinees per day.

It is worth remembering that in the H1N1 pandemic, in 2009, Brazil took almost three months to vaccinate 80 million people.

“We have 37 thousand vaccination rooms in Brazil, which can vaccinate up to 2.4 million Brazilians every day. That is the objective”, said the current Minister of Health, Marcelo Queiroga, in an audience at the Chamber of Deputies on 31 March 2021.

Minors: no vaccination expected to start

In addition to the almost 85 million non-priority adults, minors, who number around 48 million, should also be vaccinated, according to the IBGE.
Currently, they are not listed among those who will receive the vaccine, given the lack of safety and efficacy studies for immunizers in this age group and the lower incidence of severe covid-19 among these people in this age group.

But there are studies underway in the country with vaccines for minors, and the results have been promising.

Chinese pharmacist Sinovac, a partner of the Butantan Institute in the manufacture of the Coronavac vaccine, for example, announced that phase 1 and phase 2 studies involving 500 young people aged 3 to 17 years old signaled that the immunizer is safe and was able to induce human body to produce antibodies against the coronavirus.

There was no record of serious reactions. These preliminary data have not yet been reviewed by other scientists. Phase 3 of the studies will be responsible for confirming (or not) the safety of the vaccine and the rate of effectiveness against the disease.

Given the pace of vaccination in the country, it is likely that immunizers will be approved for these age groups until their turn in the vaccination line, initially in the first half of 2022.